As the only woman in the UK to hold five professional engineering qualifications concurrently, Dr Phebe Mann already stands out from the academic pack. 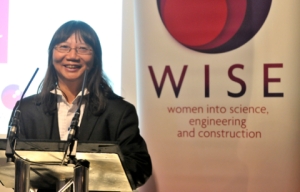 But for the senior lecturer in civil engineering at the University of East London (UEL), her career is about a lot more than life in the classroom.

Juggling her post, educating the next crop of east London’s graduates, Dr Mann strives to spark interest in the sector among GCSE-level schoolgirls in her work as a Science Technology Engineering and Mathematics (Stem) Ambassador and Talent2030 Hero.

And it is this dedication to inspiring young people – in particular teenage girls – as well as encouraging employers to be more “female friendly” that has seen her awarded an Honorary Fellowship of Bradford College.

The establishment described the Reading-based academic as “a potent role model for women in science and engineering”.

I was really humbled by that, hopefully it will inspire people. That’s the most important thing. The number of girls coming in at our degree courses is still very low. It’s about 10-15 per cent. Even in the medicine field there are 45 to 50 per cent of females – we haven’t got that number for engineering. Career masters or mistresses in a lot of schools don’t encourage girls to do things like physics or maths. They may do very well at GCSE, but they are not going to continue. But we can’t let it fall to one person to do everything. Children should start learning the subjects much earlier – in primary school – and if they feel inspired to become engineers and feel proud of it, they will push ahead. – Dr Mann

Dr Mann’s record sees her qualified as a chartered civil engineer, chartered surveyor, chartered builder, member of the Chartered Institute Of Arbitrators and a European Engineer.

She believes her own personal achievements and qualifications will inspire her students – although life in the lecture theatre was never her original plan.

After civil engineering construction projects for the City of Westminster Council, Cambridge County Council and Atkins she was drawn to academia.

Following a lecturing stint on her home patch of Reading, she started at UEL in September 2010, focussing on teaching highways and transportation and construction law, as well as civil engineering.

Most of the students come out from the degree and can find a job within a short time, we are training good people and our school has been putting a lot of effort into training young engineers. And just before the Olympics, there was a lot of regeneration throughout the east London area, and the region is now pushing to build on that development. There are more engineering and construction opportunities here than there were before. – Dr Mann