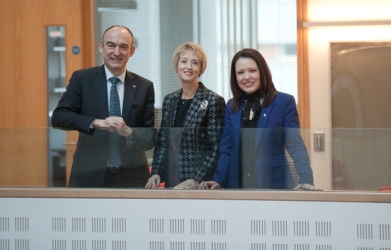 The revolutionary engineering graduate school building at the University of Sheffield has today (7 February 2014) been named after one of the world’s leading female engineers.

The £21 million seven-storey building on the corner of Newcastle Street and Broad Lane will be known as the Pam Liversidge Building, in recognition of Pam’s contribution to the world of engineering.

A Chartered Mechanical Engineer, Pam was the first woman President of the Institution of Mechanical Engineers in 1997-98. With a successful career spanning engineering with companies such as GKN, through to establishing her own manufacturing companies, Pam has held various senior business positions, including Strategic Planning Manager for East Midlands Electricity plc. She is now Managing Director of Quest Investments Ltd, which is a pro-active shareholder in engineering and medical device companies.

Pam is also a Fellow of the Royal Academy of Engineering, a Liveryman of the Worshipful Company of Engineers and was the first woman to serve as Master of the Company of Cutlers in Hallamshire in 2011-2012.

We’re delighted that Pam has accepted our invitation to have the new engineering graduate school building named in her honour, this is an incredibly exciting time for engineering at the University, and the Pam Liversidge Building is at the heart of some of our most important plans. Pam has made a real mark in the world of engineering and has been a great supporter of the University over many years and I’m genuinely proud that she has agreed to this important association. – Professor Mike Hounslow, the University’s Pro-Vice Chancellor of Engineering 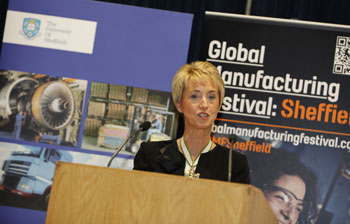 I have been associated with the University for many years and I am keenly aware of how hard everyone in the organisation works to encourage and enable women to play their role in the economic and social life of both our city and our country. The Faculty of Engineering, in particular, goes that ‘extra mile’ to persuade and assist women to choose engineering as a career. The honour of having this prestigious building named after me is one of the most special and significant I have ever been awarded and I am immensely grateful to the Faculty and the University.

The Faculty of Engineering has also announced an inaugural £150,000 scholarship fund to mark the naming of the new engineering graduate school. The scholarship fund is made up of £50,000 from a Sheffield-led postgraduate support scheme, sponsored by the Higher Education Funding Council, to ensure fair access to the professions, set alongside £100,000 from donations from former students. This fund will be used to support access for those wishing to study engineering at Masters Level in the next academic year who otherwise would not get that chance, including future generations of women engineers.

Two thirds of the funding will go towards supporting UK/EU students with their fees, with the remaining third supporting those applying from outside the EU.

The scholarships will be aimed at those who do not already have an engineering qualification and participants will be offered a mentoring scheme which will put them in touch with role models from the engineering sector, offering the students personal support and a real insight into the challenges and opportunities their mentors have faced in developing their roles and careers.

We’re currently finalising the details of this new initiative, but we believe it will have a real impact in opening doors for those, such as women, who may otherwise face barriers in pursuing careers in engineering, and in helping to redress the balance in terms of supporting participation for those who have the academic ability needed to succeed in this vital and vibrant sector regardless of socio-economic background. – Professor Hounslow.