Britain is facing an enginering crisis and women – who make up just 8.5 per cent of the workforce – are central to that. Sir James Dyson says it’s critical that we show girls the excitement of a career in STEM from a young age (not just PVA glue and wood)

Britain is gripped by an engineering skills crisis. In order to plug the yawning gap, we need to double the number of engineering graduatescoming out of our universities each year, for the next twenty years. If we don’t? Our high-technology companies will be out-invented by the international competition. Our exports will virtually disappear and our wealth will plummet. We will have lost forever the ability to engineer and make things. It’s a problem that we can’t ignore, but we can’t begin to solve it if we discount half the population based on myth. It is simply not true that women don’t ‘do’ engineering.

Earlier this month Dr Gijsbert Stoet, from the University of Glasgow,claimed that women were biologically disinterested in science: science for the boys, arts for the girls. His view is that men enjoy “things”; while women’s strengths lie in “people”.

I’m sceptical of sweeping generalisations like this. Just as I know plenty of men who can multi-task, I employ scores of female engineers who can invent. Dr Stoet’s declaration is sexist and reinforces the gender stereotype. Women are not wired to dislike engineering.

That stereotype is fuelled by a world obsessed with image, fame, endless celebrity magazines and reality TV shows. We are told that 32 per cent of teenage girls want to be models. Even more want to be ‘famous’. Just 8.5 per cent of the engineers in the UK are women. Research by Girlguiding UK has shown that 62 per cent of 11-21 year-old girls believe STEM is just for boys.

And yet, appearances can be deceiving. More people visit museums than watch football matches. We have an unfashionable latent curiosity and thirst for knowledge. Perhaps we want to be challenged and stimulated.

That’s why scientist Brian Cox’s popular radio series The Infinite Monkey Cage is so popular. He has done much to make science accessible (and has plenty of female admirers). While Countdown’s Rachel Reilly has made working with numbers more attractive. But they’re still heavily outweighed by pop singers, musicians and reality TV stars. Apparently engineering doesn’t have the ‘X Factor’.

Personally, I’m less interested in X-factor than X-projects. Dyson spends over £3m a week on research and development. It’s high tech and exciting, with not a dirty overall in sight. Perhaps that’s why our labs have more female engineers than ever – more than three times the national average. And we want more.

The reality of a career in engineering couldn’t be more different to the stereotype. Modern engineering blends creativity, ingenuity and science to solve problems – and create patentable, exportable goods. Not just headline grabbing technologies, but hospital equipment which saves lives, tools which make life easier for those in the developing world and the everyday technologies we take for granted but which keep society moving. It’s exciting to be on the edge of a discovery and iteratively developing it towards commercialisation. There are few professions where your ideas can have such vast impact – and there’s no shortage of problems to be solved.

Ignoring the bleak numbers for a moment, it’s surely obvious that we must do more to attract women into engineering. Female insights are critical to the design process – all sorts of unintended consequences emerge if it is left just to men.The all-male engineering team behind the humble airbag managed to overlook women altogether during development. The results were potentially disastrous. Whereas an airbag might hit a man in the chest, early versions hit a women or a child straight in the chin – they just hadn’t taken into account the smaller dimensions.

It’s a clear reminder that when male and female design engineers work together, the result is usually a superior product.

To encourage girls to get inventing, we need to do more reveal a true picture of engineering at a young age. Between the ages of seven and nine, children develop the key critical reasoning skills essential to engineering. It is during this time that they should be inspired and exposed to hands on making and doing, at school and home. Less Barbie, more building – and an inspiring, modern curriculum to match. As they progress through their education, we need to retain their interest and give them a glimpse into the varied, exciting and challenging life of an engineer. 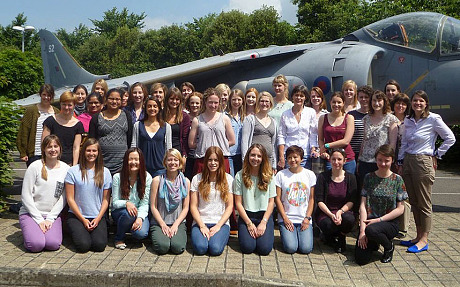 Design and Technology is the only subject that combines science and math in a practical format and gives students an early insight into engineering. But teaching needs to move away from wooden blocks and PVA glue toward a curriculum that focuses on the latest industry techniques – alongside plenty of sketching, prototyping and creativity. It’s how engineers work in the real world, so teaching must reflect this.

It’s a formula that works. The James Dyson Foundation has teamed-up with the Department for Education on a new curriculum. But it is also, separately, trialling a project with five schools in Bath. Each is provided with a suite of high technology equipment and five hands-on curriculums to work with. Students can sketch out ideas, jump on to a computer and moments later watch a 3D printer create their prototype. Scanners and laser cutters let them engineer individual parts that they can test, change and test again. Last term the students were designing self-propelled vehicles without using fossil fuels. They have tackled design briefs on delivering aid after natural disasters and making life easier for an ageing population.

We’ve seen a 200 per cent uptake in design and technology across these five schools. The pupils suddenly want to be engineers. Interestingly, gender seems irrelevant – this kind of curriculum is exciting whether you’re male or female and, ideally, we won’t have to differentiate in the future.

Hayesfield Girls’ School even had to add an additional GCSE Design and Technology class to the timetable, such was the enthusiasm. A new generation of female inventors is in development.

The results of our prototype curriculum in Bath give me hope. I can only hope that Dr Stoet will revise his view and perhaps visit the schools to see for himself. Given the right opportunities, young women (and men) make career choices based not on their gender, but on an inherent interest and passion.

History has shown time and again that our ingenuity through science and engineering solves problems. Why would young women not want to lead and take part in that exciting adventure?

Do you agree with Sir James Dyson’s view? Have your say withTelegraph Wonder Women on Twitter.